A unique and proactive approach to collaboration and improvisation.

Make Piece Together is a 40-minute piece made up of two-minute interactions between me and audience members, who are invited to interact with me and my cello in various ways. You don’t need to have any particular expertise to join in, just a sense of curiosity.

The evolution of a single painting

The evolution of a single painting- Opened Ground, from the dvd Threshold, focusing on the contemporary landscape artist Marco Crivello.

Vid by Winging It TV (BelaFanClubDept.)

“We were joined by the wonderful Bela Emerson for a live performance of Sallow Tree, at the launch of our debut album ‘White Flowers’. 27th September 2014, St Laurence’s Church, Falmer, East Sussex.

They translated their minimal, fragile and evocative sound onto record for the first time on their debut album ‘White Flowers’, released September 2014, tracks from which have been played by Lauren Laverne and Gideon Coe on BBC 6 Music. Their debut single ‘Sallow Tree’ featured on Lauren Laverne’s 6 music playlist, and they recently appeared live in session for BBC Introducing South.

fRoots Magazine: “Lutine sound like genuine originals. As English as the cricket on the village green or the dead hand revealed by the plough, this is music to listen to by candlelight, with no distraction”

Lauren Laverne BBC 6 Music “…something completely different now, this is the debut single from a Brighton band called Lutine. Apparently they have quite a big live following. And this gossamer-like sound is rather special when you see them live. So if you get the chance to experience that… do!”

forfolkssake.com “the songs sound completely lovely, underpinned by evocative, emotional melodies, like choirchildren singing in the woods. Exquisite is the word that keeps coming to mind”

folkradio.co.uk “they occupy the shifting, elemental space of their songs – a space that is sometimes airy, sometimes watery – in a way that is both effortlessly minimal and somehow whole. The result is a beautiful lucid dream of a record”

Excerpt from concert film of cellist Bela Emerson in Brighton. By processing her electric cello, Bela Emerson produces a whole host of colours and textures. Improvising into a sample and loop system allows her to build up layers of melodies and rhythms that twist and weave through a number of distinct sections that make up each piece.

Live At The Spirit of Gravity

Bela Emerson and Carolina Diaz live At The Spirit of Gravity, February 2013

See More Videos
← Brighton & Hove Music for Connection: Interactive Music Sessions With Adults Of All Ages Across Brighton Yesterday Was A Record: Four Sessions In One Day! → 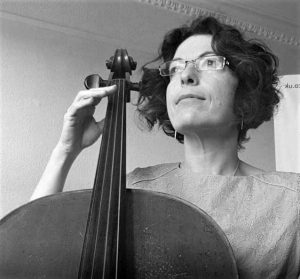